It’s been over 1 year since my last blog post, a very poor showing, so this is just a quickie to say hi and talk about the past year.

About a year ago I was in the process of packing my things up and moving across country to San Francisco. Having already moved around a bit during my career I was surprised at how stressful this move was. Previous moves have always been solo adventures but this time I had my new wife with me so every decision (house, furniture etc) was a joint one.

The first thing was finding a place to live. Having already navigated my way around the rental markets of London and New York I thought San Francisco wouldn’t be that bad. I definitely underestimated that and finding somewhere in San Francisco was a real challenge. The market is very competitive and the prices are crazy!

We got lucky in the end though and found a great place, a fantastic landlord and amazing views from our balcony (it’s so nice having outdoor space!). 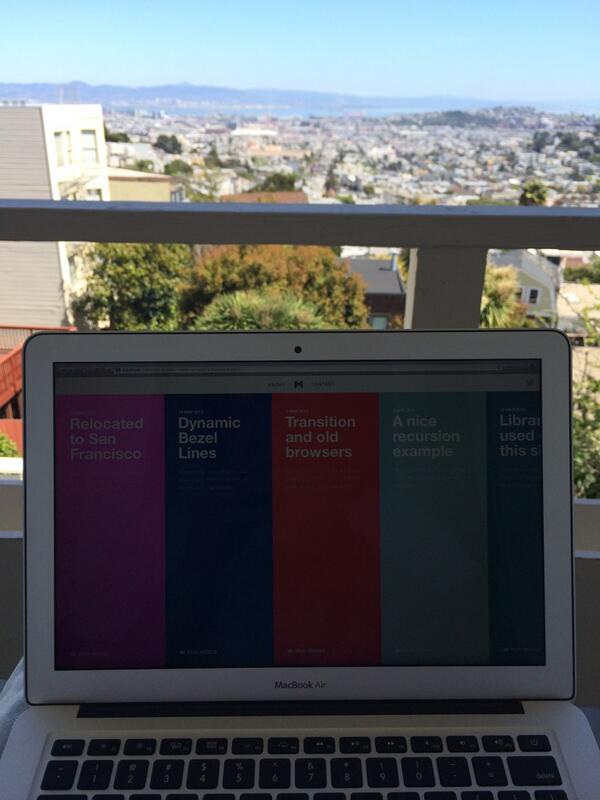 My new job also took some adjusting. I’ve previously worked for agencies (they’ve not always liked to call themselves agencies – “studio”, “boutique” etc, but they were essentially agencies). My current job is working in-house, which is great but took time to get used to. My last couple of offices had around 20 people in them. My current job has a campus. Finally, my previous jobs were all based in a city but I’m now a long commute away.

I’m really enjoying living in California. Having grown up in a small village in the English countryside I need to venture out the city from time to time. In London I just hopped on a (overpriced) train and went to visit my parents. In NYC it was a bit more difficult and at times it could feel a bit suffocating. In SF it’s so easy to escape, just jump in the car and (if traffic is good) I can be out the city in 25 minutes. I’ve got my wife, who’s a New Yorker born and bred, into hiking and we’ve already taken some epic trips.

So why has the blog gone so quiet? Well, I can’t talk about anything I do at work and since the only really interesting stuff I’m doing right now is either stuff at work or stuff directly related to it, that doesn’t really leave me with anything to blog about. I debated for a while about blogging about other stuff I like but I want to use this site as a sort of portfolio, so I didn’t want to clutter it up with posts about cakes and cats. I do have a couple of things drafted, one of which I hope to finish soon (about moving to the US from the UK). But in general it may remain relatively quiet on here for the foreseeable future.

Anyway, I’m still alive and well. I still really appreciate all the hits this site gets, all the positive emails I receive (I try to reply to them all) and people featuring this site on other blogs etc. I’m also still tweeting over at @minimalmonkey so follow me and say hello.